Today only I come across the SSMS(SQL Server Migration Assistant).

In one of the video of tech.ed May 11 from Atlanta, So thought of posting Content for the same

Where lots of very good explanation is given with n number of slides of Which I am going to post some today and also various blog working on same.

So here we go…

What is Migration in General?
I have my own pre-existing Data which on let say oracle now I want to convert my entire thing or entire application to SQL server then I am going to use Migration  Technique

Fig 1:What is Migration

What includes in the migration process and how we are going to perform same?

Microsoft has given very simple solution for the same Known AS SSMA,with help of this tool we can perform migration very easily

In which following useful component to help us for the same

i.e. Database Discovery we can perform by MS toll which is free for use know as Microsoft Assessment and Planning Toolkit which have following feature in short

Other three task is performed by SSMA in following fashion:

What are the Challenges in Data Migration and How to Overcome it? 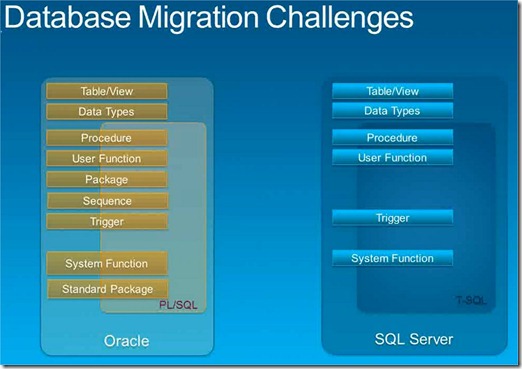 What are the Migration Best Practice ?

Which all Migration are possible Or Which Migration path is Possible ?

Now even if you not understand above concept just chill and read next content,blog and you will better understand

Microsoft announced the release of first version of SQL Server Migration Assistant (SSMA) for MySQL! Along with this release, Microsoft refreshed the existing SSMA family of products for Oracle, Sybase and Access with the latest v4.2 release.

SQL Server Migration Assistant for MySQL is the newest migration toolkit, others include Oracle, Sybase, Access, and an analyzer for PowerBuilder. The toolkits were designed to tackle the complex manual process customer’s deal with when migrating databases. In using the SQL Server Migration Assistants, customers and partners reduce the manual effort; as a result the time, cost and risks associated with migrating are significantly reduced. Our recent SSMA survey showed that 94% of SSMA downloader’s would recommend the tool to others. All SSMA toolkits are available for free download.
Since the SQL Server Migration Assistants for Oracle became available in June of 2005, Microsoft has seen more than a 250,000 downloads across all of the SSMAs. US Department of Defense, Aon, AIM Healthcare, Motorola, Simon & Schuster, Sony Ericsson and Artesia are just a few of the customers that have downloaded and used the SQL Server Migration Assistant toolkit to migrate to Microsoft SQL Server.
With this wave of release, customers can migrate to any edition of SQL Server 2008 R2, SQL Server 2008 or SQL Server 2005. Brand NEW with this release, SSMA for MySQL and SSMA for Access products also support simple and direct migration to SQL Azure.
The latest SQL Server Migration Assistant is available for free download and preview at:
1. SSMA for MySQL v1.0, out of the two downloads, ‘SSMA 2008 for MySQL’ enables migration to SQL Azure
2. SSMA for Access v4.2 out of the two downloads, ‘SSMA 2008 for Access’ enables migration to SQL Azure
3. SSMA for Oracle v4.2
4. SSMA for Sybase v4.2
Customers and partners can provide feedback viassmateam@microsoft.com.
SSMA for MySQL v1.0 is designed to work with MySQL 4.1 and above. Some of the salient features included in this release are the ability to convert/migrate:
• Tables
• Views
• Stored procedures
• Stored functions
• Triggers
• Cursors
• DML statements
• Control statements
• Transactions
The latest SSMA v4.2 release for Oracle/Sybase/Access includes:
• Console support for automated DB assessment/DB migration/SQL syntax conversion for application migration.
• Support for client side and server side data migration for convenience.
• Better support for 64-bit platform.
• Microsoft Access (Access 97 and above) to SQL Azure migration (you can continue to use existing Access front end applications though the data resides in SQL Azure)
• Support for migrating to SQL Server 2008 R2
• Support for migrating from latest Oracle (11g R2), Sybase (15.5) and Access (2010) releases